HomeBlogHow To Stand Out On Your Resume?
CV - Resume

How To Stand Out On Your Resume? 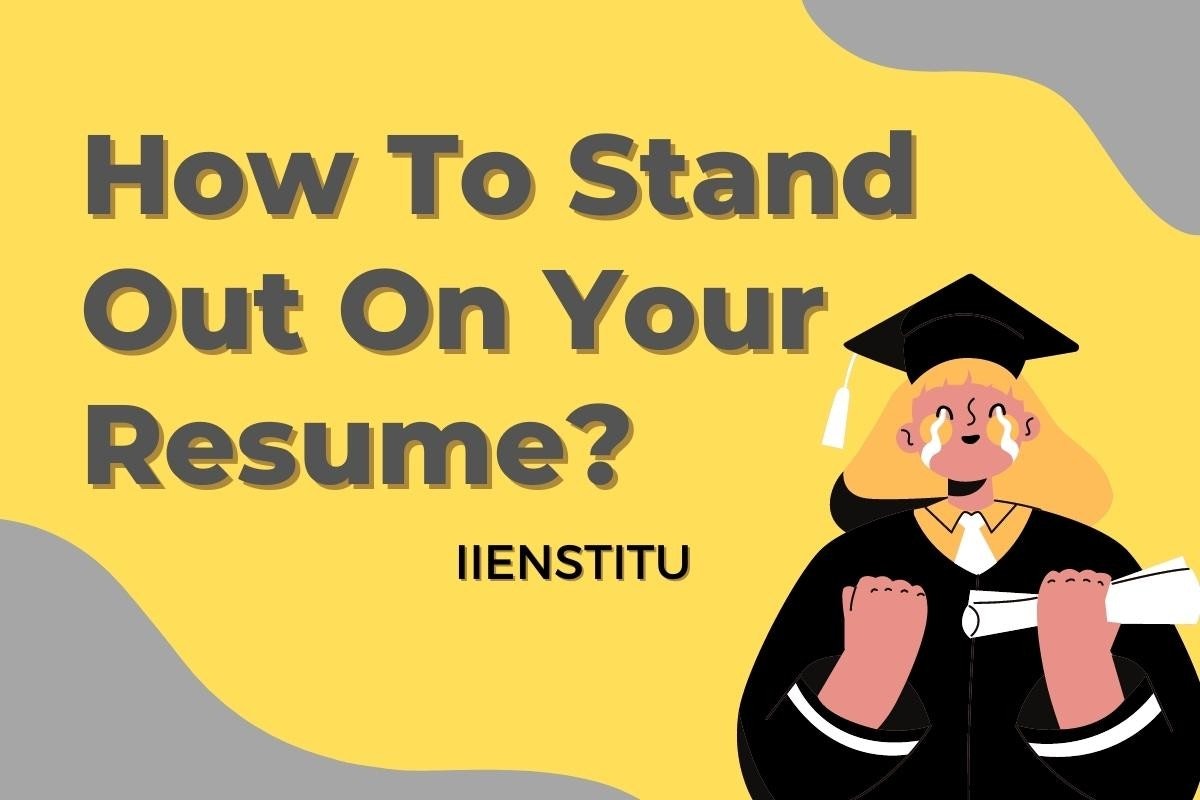 We've all been there. Sifting through countless job postings, only to find out that the interview stage is a long shot after submitting your resume and going on a few interviews for the same position. Or at least it feels like a long shot. Don't get us wrong, you need to work hard for interview opportunities and prepare for them with extensive research on each company - but there are a few key things that will help you stand out from other candidates in the interview process.

There's nothing worse than sending in countless resumes when you haven't even made it past the interview phase of your search. And if this happens often enough, the world starts looking pretty bleak when it comes to changing careers or advancing your current position without taking on additional education or training. So, what can you do to ensure your interview process yields results?

Here are some tips on creating a more competitive resume and interview package:

1) Highlight the essential skills in the job posting - interviewers will be looking for specific qualifications that may not be listed, so it's always best to highlight relevant skills that you possess that aren't generally mentioned in the listing. For example, if they're looking for 6 months experience using C++ with Linux environment, consider adding other application development background including Java, .NET or PHP. This way interviewers will get an impression of your overall programming ability instead of just narrowing it down to one particular coding language. You never want them to think "good enough" when they interview you. You want interviewers to think "great!"

2) Don't just list your accomplishments - interviewers need to quickly grasp the core of your skills and experiences, so leave out the filler or mundane details that have nothing to do with your interview success. If you're an accountant, don't list every job title from the last 10 years...instead focus on a few highlights including specific projects you've led, big clients you worked with and results achieved for those clients.

3) Keep it Updated – Make sure there are no typos in your resume – interviewers will immediately jump to conclusions if they see simple mistakes such as an outdated phone number or address. It shows carelessness even if it's unintentional. Plus, be aware of new accomplishments, promotions or changes to your contact information.

4) Don't take interviewers for granted – interviewers are taking time out of their busy schedule to interview you, so it's important to respect that and not treat them as if they don't matter. The interview process is very delicate, so make sure you're punctual with interview appointments, be courteous with interviewers who take the time out of their schedule to meet with you and conduct yourself in a professional manner during all stages of the interview process including phone screenings and face-to-face interviews. It goes without saying that you should dress appropriately for all interviews...but it can't hurt to say it anyway!

5) Resume Must Match Phone Screen…and interview – If you make it to the interview phase of the interview process, make sure your resume lines up with all of your interview responses. You might have done great on paper, but interviewers will be forming their opinions about you based on everything they're seeing, hearing and experiencing during your interview. Oftentimes phone screens are used to weed out potential interviewees before meeting face-to-face. The longer you hold an interview slot open without interviewing face-to-face or conducting a thorough phone screening, the more time other candidates have to apply for that position and get in front of hiring managers who may conduct interviews immediately after receiving resumes.

6) Be Prepared: Expect the Unexpected - It's always good practice to think of interview questions interviewers might ask you. It gives you an idea of what to expect, plus interviewers find it refreshing when interviewees are already informed on the position and company. Plus, interviewers want to be able to get a feel for how your personality will fit in with their culture, so they'll likely ask questions that give them insight into your personality. Since interviewers don't have access to social media profiles or photo's outside of the ones included in your resume or public LinkedIn profile, they need other ways to get an idea of who you are...be ready!

7) Know Your Strengths & Weaknesses - Interviewers love asking this question because it gives them insight into how honest you are about yourself. You never want to lie about your abilities or interviewers will be able to tell during the interview. They'll get a sense that you're not very good at recognizing what you can and can't do (which is one of the best qualities an employer could ask for). Plus, interviewers know there's no such thing as a perfect candidate...so they want to know if you recognize your strengths and weaknesses and what y

ou've done in the past or are currently doing to work on and improve upon them.

9) Don't Fudge The Numbers - Interviewers understand that companies don't like sharing confidential information (i.e. salary structures), but they do like to make sure applicants aren't misrepresenting themselves in order to get a higher starting pay rate...which is never ok! No one likes a liar and interviewers can tell when interviewees aren't being truthful about their past experience, qualifications or educational background (especially if interview questions start asking detailed questions about certain experiences or events). If there's something you're not ready to share with an interviewer, simply state that you'd prefer not to discuss it at this time and offer to share it during the interview process...plus interviewers will respect your willingness to be honest with them.

11) The Five Second Rule - Manners and interview etiquette are important and interviewees who break the rule without realizing it may not be looked upon favorably by hiring managers. For instance, if an interviewer offers you something to drink or eat during the interview process, always say yes . Saying no is considered impolite in most cultures. Then when given something to drink or eat, don't begin drinking/eating until the interviewer has also started sipping/chewing on their drink or nibbling on their snack. It's also important not to talk with your mouth full of food, since interviewers will think you're being rude and it could be a turn off for an interview if interviewees come across as mean or disrespectful. It's also not ok to chew gum during the interview process because it's seen as a form of disrespect in most cultures. Always wait until a break before going outside anywhere...you never want to leave interviewers sitting at their desk waiting for you while interviewees go have a smoke, text message friends through their phone or step outside without bringing interviewers along (especially in very cold climates where interview guests freeze while interviewers sit inside sweating!).

15) The Interview Etiquette Rule - If you're tired of being seen as the candidate that's never prepared for an interview or always unprepared for their interviews, there are plenty of ways to prepare yourself in advance so that you can be ready for questions. For instance, it's a good idea for interviewees to come up with examples they can share during the interview process about why they're qualified before heading into an interview. That way, your mind won't freeze up when you need to provide P R O O F S that you've got what it takes...instead, all you'll have to do is talk! interviewees should also create an interview questions list so that they'll be ready for interviewers who want to ask them about their qualifications. If interviewees listen closely to how interviewers describe the job, they'll get a good idea of what interviewers are looking for...and can prepare examples beforehand so that interviewees can share these points during the interview process.

16) The Interview Holiday Rule - if you're interviewing around the holidays or over break, then your schedule will typically need to be flexible during this time period. That way, if someone needs to cancel an interview while everyone else is busy with holiday parties and other obligations , it's easy for interview guests to accommodate other people's schedules. It's also important interviewees make interviewers feel comfortable by being flexible if interviewers need to reschedule or cancel on interview guests .

17) The Interview Manners Rule - During the interview process, interviewees should always remember interview manners. For instance, it's a good idea for all interviewees to remember to send a thank-you note after an interview because this helps interviewers remember who you are and that will help them start thinking about candidates in advance. Sometimes sending a thank-you email instead of a paper letter is nice because these emails tend to be more timely and they're easy for everyone to read. If interviewees show up late or don't show up at all during interviews, then this can have a negative impact so it's important to keep interview schedules in mind and not be late or forget interview appointments.

19) The Interview Prep Rule - If you want your resume to quickly stand out from others, then there are plenty of ways for candidates to prepare before their next interview. interviewees should make sure they know when interviewers want them there and give interviewers a call beforehand to confirm interview times, if possible. That way, interviewees can be sure they're on time for their interview appointments and this shows interview guests mean bu

siness! If interviewees ever need to cancel an interview appointment , then it's important that they do it as early as possible so that interviewers aren't left in the lurch or scrambling to find replacements.

20) The Interview Require Rule - Nothing is more frustrating than having an interviewer ask questions about requirements you don't actually have or experiences you don't really have . This only shows lack of attention to detail on part of the candidate and hiring managers will take note of such things. interviewees should clarify what each interviewer is asking about, if interviewers' requirements differ.

21) The Interview Speak Rule - interviewees should remember that interview tactics are different than the office environment so the interview process won't be exactly like work! interview guests should use their best manners and let interviewers know how closely they'd fit with the company culture , too. When interviewees come across as pushy or rude to interviewers, this can rub them the wrong way...after all, interviewees want to seem approachable not demanding! Candidates don't need to act overly professional during interviews; in fact, it's more important for them to relax and feel more comfortable .

22) The Interview Tie Rule - If you're interviewing for a position that requires interview skills , interviewees should go into interviewers' offices with confidence! interviewees can practice interview-specific moves before interview appointments but they shouldn't try to change the way they talk and act... interview guests should always be true to their own personalities and styles.

The most importans is keep it update, be prepared unexpected things, know your SWOT, practice and trust yourself.

For example, when you get certificate from IIENSTITU you should write on your resume. If you write a date about anything, keep it up-to-date and check before sending to companies.

Related Posts
Our team of experts is passionate about providing accurate and helpful information, and we're always updating our blog with new articles and videos. So if you're looking for reliable advice and informative content, be sure to check out our blog today.
Certificate

24 Skills You Learn By Getting A Free Certificate Course

10 Best Ways To Prepare For Your Next Job Intermission