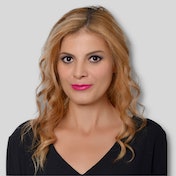 Since 2015, he has been giving Sign Language Education at the IIENSTITU. It tries to increase people's interest in sign language by preparing different programs such as theater and performances in sign language.

She was born in Samsun in 1986. She graduated from Anadolu University, Business Administration and Atatürk University, Occupational Health and Safety. She is doing her master's degree in Rumeli University, Institute of Science and Technology. Working in the health sector in 2009, Asuman Çalışkan was also in contact with deaf individuals due to her job. Later, she took sign language instructor and interpreter training by being involved in a project and switched to sign language trainer and interpreter professionally.

Asuman Çalışkan, who also took part in the Olympics by taking international sign language training, gives sign language trainings in different institutions and organizations to remove barriers in communication, believing that hearing in deaf people is not actually an obstacle to communication, but that this obstacle is actually created by hearing people.